The Bible is full of iconic moments, well-known stories and famous sayings. If someone were to ask, “what is the most important event?” there would be a lot of great candidates. If things were narrowed down to only the Hebrew Bible (or the Old Testament as Christians call it), many people would say the creation of the world as recounted in Genesis 1 and 2. Nothing would ever happen if nothing existed so creation, to say the least, is a very solid choice for the most important event.

Interestingly, while Genesis 1 and 2 obviously matter, they are hardly referenced or alluded to in the rest of the Hebrew Bible. Even other creation accounts do not seem to specifically draw on Genesis. In fact the primaeval account, that is Genesis 1-11, which includes the famous stories of Cain and Abel, the Flood and the Tower of Babel, barely features in the rest of the Jewish scriptures. So what then is the most important event in the Hebrew Bible, even more important than God creating the world? END_OF_DOCUMENT_TOKEN_TO_BE_REPLACED

G.K. Beale is a bit of an expert on the subject of the Temple in biblical theology. He did happen to write a whole book on it. Given that, it’s unsurprising that he devotes some space to exploring the significance of the Temple in NT theology in his recent New Testament Biblical Theology: The Unfolding of the Old Testament in the New by sketching it’s structure and function in the OT. One of the more eye-opening claims he makes in this section is that the Bible pictures the Garden of Eden as the first Temple in the first creation. He gives 9 arguments/lines of reasoning for that point (pp. 617-621):

During the period of Judah and Israel’s monarchies, it was the prophets who resisted folk Yahwism, that is worshipping YHWH alongside the gods of indigenous folk religion. As I mentioned in the previous post, scholars have pointed out that Israel became truly monotheistic only after the Babylonian exile which brought independent monarchy to an end. With the national existential crisis of the destruction of the temple, the capital and exile from their homeland, the warnings of the prophets over the centuries that folk Yahwism will have disastrous consequences had been horrifically vindicated. Yet it was those same words that gave the people hope for restoration, refocusing and energizing them for covenant faithfulness to YHWH alone.

END_OF_DOCUMENT_TOKEN_TO_BE_REPLACED

Any person familiar with the Hebrew Bible would recognize the Israelite propensity towards idolatry is the main plot conflict driving the entire narrative. What many people do not recognize is that it wasn’t that Israel was completely rejecting their God but rather they were comfortably worshipping other gods along side him. This is known as syncretism, where you combine different cultures and religions into one. Old Testament professor Claude Mariottini in the following series gives a summary history of religious syncretism in ancient Israel. 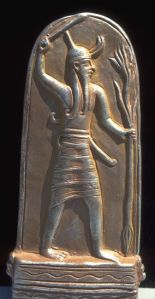 Syncretism is the merger of different, and at times, contradictory religious practices, faith, and beliefs in order to reconcile different religious traditions found within a community and in order to find unity between competitive views.

Syncretism in the Old Testament involves Israel’s absorption of Canaanite religious practices into the religion of Yahweh. Syncretism arose in Israel because Israel did not practice its religion in insolation, detached from its Canaanite neighbors.

Abraham and his family came from a culture where syncretism was a fact of life: “Thus says the LORD, the God of Israel: Long ago your ancestors—Terah and his sons Abraham and…

In the video below Dr Tim Mackie, a Bible scholar and co-founder of The Bible Project, a crowd funded Christian animation studio whose wonderful videos I feature quite regularly, explores how biblical poetry can powerfully inform and motivate the work of Christian creatives.

END_OF_DOCUMENT_TOKEN_TO_BE_REPLACED

In the short video below The Bible Project takes us through how Jewish people have traditionally conceived of what Christians came to the call the Old Testament. END_OF_DOCUMENT_TOKEN_TO_BE_REPLACED